Viridian International Sent a working party to weave their magic.

W
With the support of  Viridian International, we were able to accomplish in 3 days what has not been done in several years; that is upgrading the Boys and Girls government run centres in Ormoc City, Leyte.

Day 1 was a fun filled day of taking the boys on an outing to a local volcanic lake known as Lake Danao. For many of the boys, this was the first outing outside of the centre they had been to, with some boys having lived their for over a year. The boys and the 20 volunteers from Viridian had a ball, engaging in swimming, laughing and building of relationships. The day ended with a spectacular meal and catering provided for all the boys, staff and the volunteers. the boys were introduced to games such as musical chairs, hide and seek, musical statues and many more. A fun filled evening for all.

Day 2 is when the work began. Painting, cleaning, repairing, gardening, plumbing and other work.

Day 3 and the work continued with the group concerned our time would run out. By 3pm and miraculously it was all done. The boys centre had a brand new coat of paint bringing new life and a sense of peace. The boys ablution block now had running water, for the first time in at least 4 years the boys could now shower upstairs and use their toilets in privacy with a sense of dignity. A brand new water line was run from the mains, new piping, fixtures, taps and shower heads. The back laundry area was cleaned up with proper washing lines installed and the area gravelled with flower boxes installed. 24 new mattresses to provide adequate sleeping comfort and 10 wall fans were installed bringing comfort and relief especially at night from he heat.

The girls centre had their playground equipment painted and new swings attached. Their sleeping quarters windows had mosquito guards installed. Spare mattresses were provided as well as 10 wall fans were installed. Sleeping from now on will be much more comfortable with air flow and no mosquitoes. Dinner with the girls at end of day 3 included wonderful food, dancing and singing, playing games and a lot of fun.

Friendships and lasting memories were created in 3 short days.

A great time was had by all as we shared fun times, laughter and smiles. We repaired the structure with some material and paints but the real work was etched upon the hearts of the children, truly priceless….

Get a team together for team building and character strengthening. Talk to us about facilitating an opportunity for you to provide much needed assistance. It’s easier than you think. Bring your skills and heart.

I
In 2013 when Typhoon Hiayan (Yolanda) tore through parts of the Philippines, a trail of devastation was left in its wake. More than 8000 people were amongst the dead, with hundreds of thousands of people left homeless.  10 weeks after the typhoon I was doing service work in the devastated areas ; the majority of homes and businesses still left standing were without electricity.

During my time there, I was able to visit some of the orphanages in the area and offer some  assistance with food and other basic items.

It was at this time that I came across what is referred to in Ormoc as the Boys Holding Centre. This Centre is the old police town jail and is set up for disabled male adults to reside in. Since there are no care facilities for male children, they are housed and cared for in this old jail and live with intellectually disabled adults.

This building was not spared from the storm and had parts of its roof ripped off, many internal windows had been shattered, the ceiling to the boy’s bedroom was ripped away and some of the roofing was missing. Rain and wind swept into their room whenever it rained. It was so sad to see how these boys were living and the conditions they had to endure.

With the opportunity to return to Ormoc twice the following year I was saddened that in all that time, no repairs had taken place at the boys holding Centre. I made it a goal to do what I could to fix up their ‘home’.

It was in April 2015 that I had the privilege and honor of returning to Ormoc with some friends and took upon the task of repairing the Orphanage.  We were able to employ some local workman to assist in this task. We started on the tasks of repairing the roof over the eating area, replacing 27 broken panes of glass throughout the centre, repairing the roof and ceiling in the boy’s bedroom. Once the basic repairs were completed, we then gave the centre a new coat of paint. The boys all got involved in the painting and loved the opportunity to paint and assist with making their home a bit more homely.  A wall mural with all the boy’s hand prints on it was the highlight of the 5 day project.

Our group of volunteers spent a great final day playing games with the children and treating them to a nice big meal. The boys were introduced to water bombs and other water games. A great time was had by all as we shared fun times, laughter and smiles. We repaired the structure with some material and paints but the real work was etched upon the hearts of the children, truly priceless….

A long term goal of Sancss is to establish a caring and nurturing home for these children with trained and qualified staff. 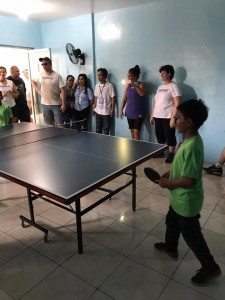 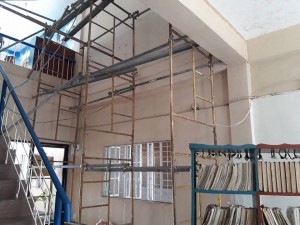 Scaffolding set up prior to painitng 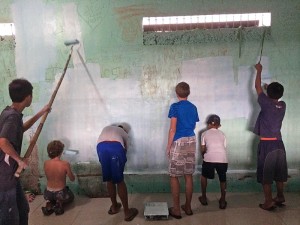 New donated mattresses for the boys. 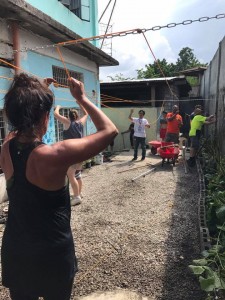 Clothes area getting an overhaul. 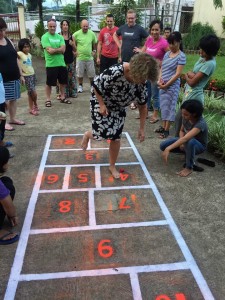 Girls being introduced to hopscotch 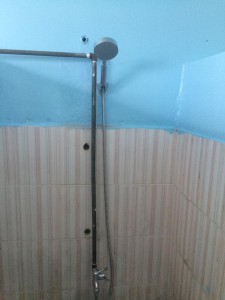 New taps and shower heads in the boys bathroom.

Some of Our Other Projects 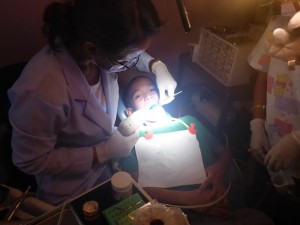 Getting some teeth fixed. 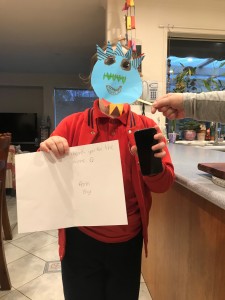 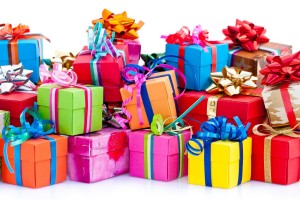 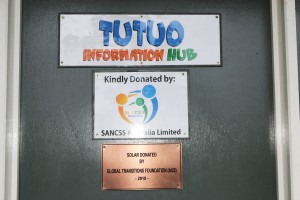